A downloadable game for Windows

Hello! My name is "Ahmad Raza" and I'm from Pakistan.
I love game development and this is my first game.  That's all I can tell you about myself.

Enjoy the game and if you like our game, then rate this game and support us.  All donations are considered as a support of the game developer :)

Really Cool game, spooked the hell out of me, Please consider checking my video and subscribing!

This one freaked me out right from that reflection in that room...you know what I'm talking about.

I really loved this game, i'll give the new version a try soon and maybe upload that one as well!  You did great!

I have updated my 2nd game yesterday which is 80% relative to granny and I really need reactions on it beacuse it took me 5 months to create that game!

Btw I really like your name because I usually use the "Boi" word with my friends. It looks cool to me.

Really enjoyed playing this game. I like the way it built the suspense and then hit you hard at the end. I also played The Open House recently and saw it was a similar house as well. I'm really looking forward to your next game! If you're interested, it's game 1 of this episode. Cheers!

I updated my 2nd game today. You can check it out by visiting my page.

Is that the same House from The Open House aka House Party & maybe a few other Horrorgames with that House?

enjoyed the game, thanks!

(im not trying to be rude) but im really dissapointed because this house is used 100 times at least in other games like mortem ,house party, the survey , zombie claus,open house and other more ...i hope you take this in consideration for your next projects .thank you

I did not know that because it was my first game.I don't play itch games that much because i am a fan of battle royale online games. I'm 100% happy with your statement. I am working on my third game and i build full level by myself xD.

thanks for taking this as a critique :)

You can check out my 2nd game by visiting my page.

These are both great games. I didn't realize this second game A Sold House was from a different developer!

At first I wasn't sure what I was going to expect, but then I was completely surprised hahaha! Fun game!

Hellow there creator. I played your game and the jumpscares got me really good. After 3 months it feels pretty good to get those jumpscares again. Thanks for that. Anyway enjoy my video here.

this game is boring

It was my first game pal

Your game is interesting and has same good jumpscares, good job. My gameplay is in portuguese.

Reply
XStikerMunsterX9 days ago
My mom and I played this and lemme tell you, it wasn't too bad :) Definitely needs some more atmosphere and the jumpscares were a little much, but all in all, we enjoyed playing! It was a lot of fun seeing how scared my mom got! <3 Thank you for making the game!
Reply
LosCash211 days ago

not bad game it look nice game start at 9:05

There's some angry delivery people in this neighborhood jeez haha this was decent for a first game, but a very basic horror game. The jump scares def get ya good tho lol I'm looking forward to your future projects!

I am gonna upload my next project tomorrow and i am glad that you are curious.

The jumpscares really got me haha

BRO IT WAS SICK. For real, i don't remember the last time a horror game dragged me intro the atmosphere like your game. REALLY GOOD BRO

Thnx for playing and i hope you enjoyed it.

Scared the shit out of me! Great to play for some quick jump-scares.

Is mainly jump scares but I still enjoyed it quite a bit! Not bad for a first project! Keep it up! :)

Played through it. The jump-scares got me good even though it was a very short game. Not bad for a first game! Definitely recommend it if you're looking for a short horror game.

I like this game. You did very good job for the first time. I expect more awesome games from you in the future :) Keep up the good work :)

I enjoyed this game but  my only issue was the shadows. With enoug polishing up I can see this game being a hit.

Not too bad, felt the jumpscares were a little random though.

Reply
ElectromonStudio15 days ago
Its Short but Good!!
Reply
BuzyBoy15 days ago

It's my first game and i will do my best in 2nd game. xD

I piss my pants before even playing it

The environment is completely silent and idk why did you scare ...

Reply
itsreactant15 days ago
This game got me pretty good. Congratulations. I enjoyed playing!
Reply
baphy142815 days ago

Short and sweet! or should I say short and scary? LOL This game got me for real. Love the non-typical jumpscares.

I was eager to upload my game and i did not add more jumpscares!

Thnx for you support!

Thnx for playing and i am working on my second gam.

This was a great first game!  Keep it up!

Was a little slow at this game haha but once i got into it, may have sharted a little :'D your games at the 7:10 mark, hope you enjoy!

Thnx for playing it!

Wish it would have been a little longer. But still enjoyed, hope you guys enjoy it too!

I know it's a small game but now i am working on my main project which is for both platforms (pc and android)!

Oh yay! I'm very much looking forward to that! Let me know, I'd love to play it when it's finished! :D

Thnx, i was busy and it took me time to reply!

I loved the idea of echo in house, thnx for your support!

So, for a first game, this is quite good. It's a delightfully simple and mundane beginning to a game - just picking up something that was forgotten in the house that was just sold - and it gets things started nice and easy. And I certainly do love the fact you included an Objective button, which was much appreciated.

There are some nitpicks, like desperately needing someone to do a bit of correction on the english (it wasn't incomprehensible, but it could stand some touchups), a few leaps in logic in the character's behavior (who goes to the toilet in the dark wielding a flashlight?) and no particular reason given why you can't just grab what you came for and leave. It also took me surprisingly long to find the key - I assumed something would happen when I had turned off all other light, not that the light behind a locked door counted, especially since the Objective button did not mention a key at all. But again, that is a nitpick.

The scares are few in this game when they do happen near the end, but they are surprisingly effective when they do - sudden, in odd places and definitely raising some questions. Your game is simple, but I rather liked it for what it was. Keep working at it - I'm sure you have some awesome tricks up your sleeve for later stuff.

Thnx for your support!

Thnx for playing my game.

Thnx for your support 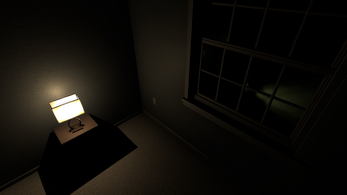 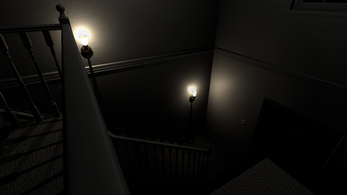 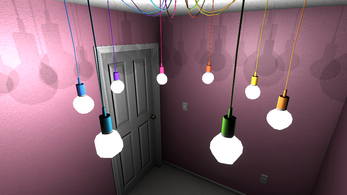